Curated by Creative Director, Debra Barrera - Nuestro Hogar is a two person exhibition featuring Francis Almendárez and Ana Fernandez that investigates the concepts of creating and recreating home space through the lens of identity and personal history.

The exhibition will also be featured as a participating space in the inaugural Latin Art Now biennial which "brings together renowned scholars across the country to discuss groundbreaking ideas, research and scholarship within Latin and Hispanic communities."

Francis Almendárez (b. 1987, Los Angeles, CA) is an interdisciplinary artist who traverses the intersections of history, ethnography and the arts. In attempt to make sense of and re-construct identity, he uses them as tools to address memory and trauma, specifically of migrant and queer bodies of Caribbean and Central American diasporas. His work, ranging from video installation to performance and text, incorporates music and storytelling, and brings to the foreground time, labor and rhythm. Combining personal narratives with those of his grandmother, Almendárez uses the biographical to collapse and juxtapose past, present and future, subtly touching upon underlying, overlapping and recurring themes from post-colonialism to migrant labor to gender roles and motherhood.

Almendárez has participated in national and international exhibitions and screenings including Voices of Our Mothers: Transcending Time and Distance, Houston Center for Photography, Houston, TX (2018); Sisyphus, Ver.20.18, National Taiwan Museum of Fine Arts, Taichung, Taiwan (2018); Family Reunion, Pi Artworks, London, UK (2017); Videosubbota-2, CCI Fabrika, Moscow, Russia (2017); and Le Paradis, un peu plus loin, GALERIE DIX9, Paris, France (2017). Almendárez is the recipient of the Carol Crow Memorial Fellowship from the Houston Center for Photography (2018) and a participant of the ICA Moscow Summer School (2015). Almendárez received an MFA in Fine Art (with Distinction) from Goldsmiths, University of London (2016) and a BFA in Sculpture/New Genres from Otis College of Art and Design (2013).

Ana Fernandez is a multidisciplinary artist who explores the diverse landscapes of Latino communities in South Texas through landscape painting, portraiture and through her work as a street vendor in her food truck, The Institute of Chili.

Fernandez holds a BFA from The School of the Art Institute of Chicago and an MFA from UCLA. She has exhibited at Women & Their Work Gallery (2012), Institute of Texan Cultures (2012), McNay Art Museum (2018), Guadalupe Cultural Arts Center (2017), Blue Star Contemporary (2012), and the Contemporary Arts Museum Houston (2018). The Nettie Lee Benson Latin American Collection currently houses her official archives at the University of Texas at Austin. Ana is a recipient of both the Joan Mitchell Foundation Painters & Sculptors Grant in 2017 and an Artpace Artist in Residence in 2018.

A message from curator, Debra Barrera: "For about a year I have wanted to curate a show investigating concepts of creating and recreating home space with artists who have complex American histories and identities. In my own practice I've been thinking a lot about how our first curators, our first museums, are the homes most often decorated by our mothers and grandmothers. For me, those spaces were filled with vestiges of Mexico that over generations became more and more American in both culture and aesthetics. When I recreate home space as a third generation Mexican-American what items am I choosing? When I think back into my memory what stands out? What land do I truly inhabit in my own home?
"I posed these same questions to two artists who have similar backgrounds and histories to calling the United States their home, Francis Almendárez and Ana Fernandez. Both of these artists are the first generation in their family to be born in the US. Almendárez' family is originally from El Salvador but lived in Honduras before coming to Los Angeles. Fernandez' family is originally from Mexico and she grew up in Corpus Christi, Texas, where I also grew up.
"We all share similar stories despite having distinctly different backgrounds. What binds us are strange cultural markers of home space -- the scent of cumin, vapo rub, and spanish rice, the sight of bright paint on black velvet, a stone molcajete in the kitchen, and a gaussian blur Jesus or bronze crucifix somewhere by a doorway. In our homes there was always a persistent presence of a land none of us could truly claim. However, we were all inhabiting a country that is reluctant to claim us.
"Nuestro Hogar allows these two artists to delve into their past and recreate a domestically inspired present without boundaries. Unlike the gallery white cube, Jonathan Hopson is a 1914 Arts and Crafts bungalow--distinctly American, distinctly a home. The space is also unlike any structures these artists or their parents and grandparents would have inhabited. For me, this reclaiming of a distinctly early American architectural space in the hands of two Latinx artists is very important. It allows for a representation of Latin history to be retold in Texas--filing a space that would have never been given.
"The result is an intimate and in depth conversation that is at once is very personal and universal. The documentation of these two artists' histories are distinctly American and contain immense complexity, validity, and strength. What results is an understanding of the vastness of "American", Latin American, and United States identity in context to Latin American immigration. This exhibit acts as an anthropological doorway to understand histories that are often misunderstood if not completely overlooked. Nuestro Hogar is our home echoing far beyond ourselves." 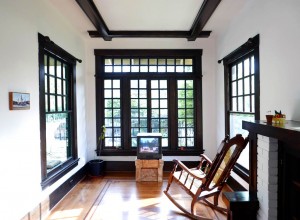 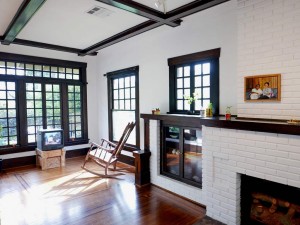 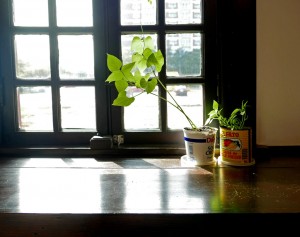 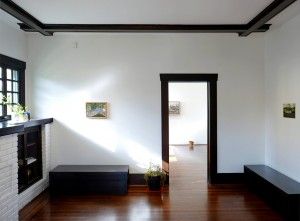 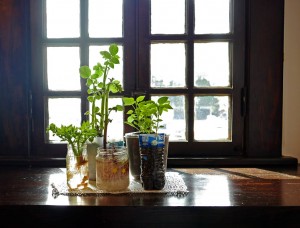 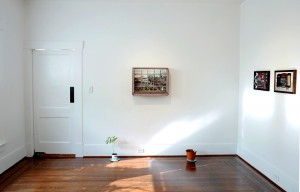 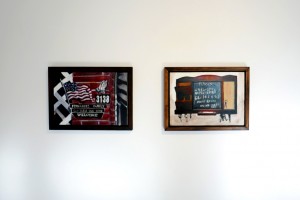 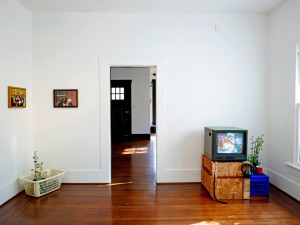